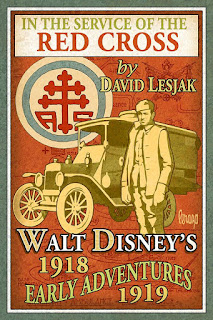 The book, whose beautiful cover was designed by Mike Peraza, is fascinating. It covers Walt's time as a Red Cross volunteer in the same amount of details as Tim Susanin's book (Walt Before Mickey) had done with Walt's early professional years. For many this is a book that is almost too detailed. But NOT for Disney history geeks, of course. A "must have" from my standpoint. And the never-seen-before photos it contains are priceless.

[I'll have copies for sale at the Pacific Northwest Mouse Meet in Lynnwood Washington on July 11. The book will be available on Amazon and through Theme Park Press. The book contains transcripts of 60 previously unpublished letters between Walt and his former Red Cross canteen boss Alice Howell, as well as a total of 16 photos of Walt and postcards he sent home that have never been published before. There is also a scrapbook containing five pages of art Walt created while in France and which he sent home to a high school chum - the book will showcase the art publicly for the first time. The book draws heavily on the landmark Pete Martin interviews so readers will be able to "hear" Walt talk about this pivotal time in his life.]