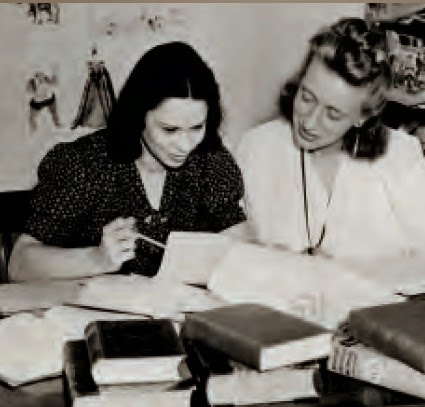 One of the great joys of Disney history is that you are always making new discoveries.

As I have mentioned often, one of my favorite Disney history books is The Disney That Never Was by Charles Solomon. It is a book that I simply can't stop re-reading time and time again. In recent months, though, through my work on They Drew As They Pleased, I have made a few discoveries about its content that I thought I would share here:

a) The color storyboard drawings of The Gremlins at the top of page 104 were drawn by artist Holling C. Holling.

b) All of the drawings of Don Quixote from page 162 to page 165 (even those attributed to Bob Carr and Martin Provensen) were actually created by Eduardo Solá Franco.

In the last few weeks, I also made a few discoveries related to John Canemaker's The Lost Notebook (which is at the very, very top of my list of best books of 2014).

a) The above photo (page 263 in the book) shows researchers Mary Goodrich (left) and Diana March (right).

b) The drawings of the "bug orchestra" that John attributes to Johnny Walbridge on page 162 were actually designed either by Walt Scott, Don Christensen or Lloyd Harting (the three artists who actually worked on the abandoned overture for "The Nutcracker Suite" section of Fantasia).