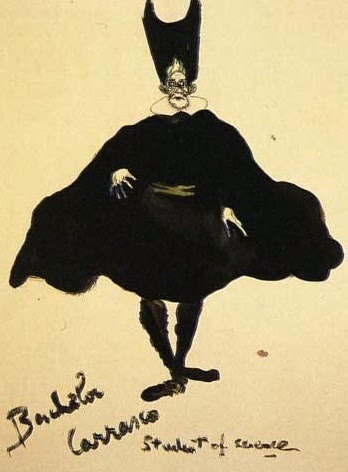 [NOTE: This post was released yesterday by mistake. Here is the correct version.]

I was researching last week the life and career of Ecuadorian painter Eduardo Sola Franco, who worked at Disney briefly in the late '30s and early '40s, tackling mostly work on the abandoned Don Quixote project.

I now have clear proof that the above drawing was created by him and not by Bob Carr (as stated in The Disney That Never Was).

I have just ordered Sola Franco's autobiography (not a cheap buy) and am trying to locate his diaries which do cover the period of his work at Disney.

In the meantime, I have located the below interview which appears in Spanish on the website of the biographer and interviewer Rodolfo Perez Pimentel, and which I have translated for your enjoyment.

[In '39 I boarded a freighter going to San Pedro, California, and from there I went to Hollywood in search of work. A friend of mine introduced my drawings to the famous director Frank Lloyd, winner of two Oscars for his films, who immediately got excited about my art and hired me to do a storyboard with watercolors for a movie that would be made off the coast called Ruler of the Sea with Douglas Fairbanks Jr. We all lived in Santa Catalina and we were going to sea to film. Through Fairbanks I met many actors of the first magnitude and, frequenting the house of Norma Shearer, I made the portraits of Margaret Lockwood, Carole Lombard, Merle Oberon, Loretta Young, David Niven etc and of the director Jack Rose from the Disney Studio, who hired me to work on the script and storyboards of a project of Don Quixote.

I left Paramount where I worked on The Cat and the Canary earning $500 a month, for [a job at Disney at] only $200 a month but with the offer of a seven-year contract at $1,000 a month. For nine months I worked tirelessly and did about two thousand extremely detailed drawings for the film about Don Quixote. The costumes were inspired by the works of Velasquez, the backgrounds by El Greco, and so on. One night Walt Disney visited my office, looked at my work, approved of it and my work was then sent to Joe Grant in order for the project to move to the next stage. My drawings, however, were deemed too academic. I was asked to work on another project: abstract drawings for the film Fantasia, as story artist for parts of Bach's Toccata and Fugue sequence and on the Night on Bald Mountain sequence, [as well as on Peter Pan.] Various issues resulted in Don Quixote not being completed and my work was put on hold.]