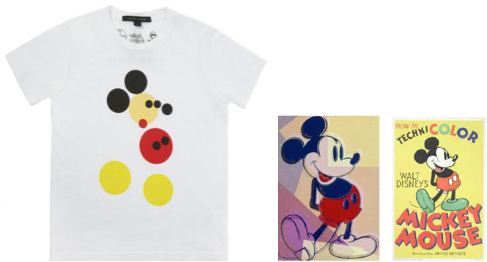 English artist and self-promoting entrepreneur Damien Hirst is best known for his 17-foot-long shark floating in formaldehyde — exhibited at the Metropolitan Museum of Art in 2007-2010 — a work that will long live in esthetic infamy. The chi-chi Paris-based créateur de mode Marc Jacobs is currently marketing a "limited edition" Mickey Mouse tee-shirt designed by Hirst.

The image emblazoned on the shirt was created originally at the behest of the Disney Company in the form of a six-foot-high painting on canvas using ordinary household gloss out of a can. The picture was sold at auction in February by Christie's for more than $1.5 million. A portion of that sum was donated to the British inner-city charity Kids Company.

Hirst's Mouse is an abstract, geometric distillation of a silkscreen design by Andy Warhol from 1981, itself a re-working of a 1933 United Artists poster presenting Mickey in one of his early iconic poses. Though surely not to everyone's taste, the pricey Hirst/Jacobs threads might make a nice holiday gift or stocking stuffer for that special Disney fan in your life who won't mind seeing Walt Disney's graphic alter ego deconstructed and dumbed down into a dozen circular daubs of color.

The shirts are sold in kids' sizes at $58 a pop, on white fabric only. The adult model comes in black only ($98), which is strange — if not an outright gaffe — since Mickey's ebony ears against the black background are virtually illegible. (Did Disney Brand Management actually sign off on that?) Also: unlike its two prototypes, Hirst's Mickey has no tail. Ouch.

"100% of the proceeds" from all sales are earmarked for the Kids Company charity, according to the Marc Jacobs website. That may cushion the pain in your purse if you shell out $98 (plus tax and shipping) for one of the tees.