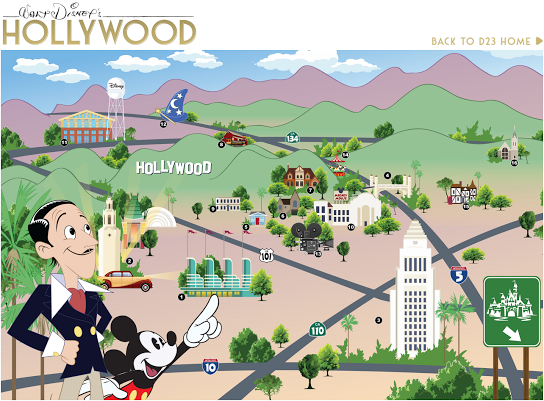 [Currently on the D23 website is an interactive map of "Walt Disney's Hollywood" with pop-up pics of sixteen structures or places intimately associated with the master. Among Walt's "old Hollywood haunts" are three of the four houses he lived in between 1923 and the early 1950s. The fourth and final Disney domicile on Carolwood Drive, in Holmby Hills, has been torn down. But "Walt's Barn," originally situated on the estate, is on the map (#16).

The artwork includes a nifty caricature of Walt and one of the better modern-day, studio-sanctioned, "on model" images of the classic Mickey Mouse. The drawing on the map (#11) standing in for the Burbank studio depicts the whimsical, post-Walt Team Disney Building, designed by Michael Graves, and featuring caryatids (as on an ancient Greek temple) in the form of the Seven Dwarfs.