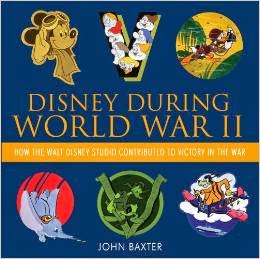 The other book I just got from Disney Publishing is Disney During World War II: How the Walt Disney Studio Contributed to Victory in the War. Author John Baxter did a fine job on this volume. He unearthed some artwork that had never been seen before and summarized very well the different projects the Studio worked on during WWII. There is even new information that I had not seen anywhere else until now. This is a book that is well-worth picking up and which will complement nicely David Lesjak's recent volume Service with Character: The Disney Studios and World War II and Richard Shale's Donald Duck Joins Up.

Of course the book(s) I am really looking forward to on this subject is Paul F. Anderson's magnum opus on Disney and WWII which should be complete once Paul stops being the unfortunate protagonist of his own version of the Book of Job. Soon, hopefully.