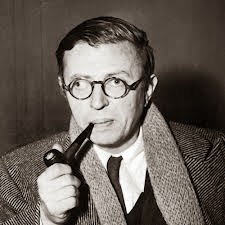 This just in from Disney archivist Ed Ovalle about the photo I posted on March 3, 2014.

[The group of French journalists visited the Walt Disney Studio and met Walt on February 14, 1945.

There were eight journalists in the group which Walt met:

According to an IOC from Jack Cutting to Walt, the O.W.I.'s main purpose in having the journalists tour the country was to get them to do a series of articles on "America at War".  During their visit to the studio, they were shown numerous samples of the Army and Navy training films, C.I.A.A. Health films and were very enthusiastic about them.

One of the journalists told Walt how Léon Bancal was put in jail by the Germans because of the implications in his first Mickey Mouse article. I assume they were talking about, "Au Revoir, Mickey" which appeared on Oct. 1, 1942, in Le Petit Marseillais. They asked that Walt honor Léon Bancal  by making a drawing of Mickey on a reprint of the article and Mme. Benichon asked if Walt could send a brief greeting addressed to the children of France.]