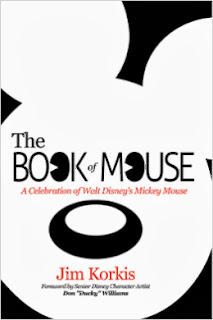 To celebrate the release of Jim Korkis' The Book of Mouse, I conducted a quick interview with him last week.

Didier Ghez: When and why did you decide to write this book?

Jim Korkis: Several years ago, I found myself frustrated when I was writing an article about Mickey Mouse and I had to go through dozens of books, magazines and websites to find the information I wanted. I felt there needed to be one reliable resource book with all the important information and so I started a file folder that just kept growing over the years.  In addition, I wanted to debunk the flood of incorrect information that is out there on the internet.  So, I have been working on this for years and fortunately it all came together in time for Mickey’s 85th birthday.
One site I found last week (and this is an exact quote) wrote that “Steamboat Willy (sic) debuted at Grauman’s Chinese Theater on June 29,1929”.  I think the only things correct in that sentence are “at” and “on”. This was part of an authoritative four page article with a long list of comments from readers complimenting the author on listing all this information.

DG: What are the key chapters of the book?

JK: There are several major sections and each section has sub-sections or chapters or both. Mouse-ce-llaneous covers where Mickey lives, how tall he is, who Ub Iwerks was, an exclusive interview with Floyd Gottfredson, the birth of Mickey Mouse merchandising and more.  Mouse-ka-Tales is twenty pages of Mickey Mouse anecdotes.  Mickey at the Movies has chapters on the making of Plane Crazy, Steamboat Willie, Runaway Brain, Sorcerer’s Apprentice and more like UnMade Mickey Mouse cartoons, Mickey’s Oscar appearances, etc. Mickey Mouse Annotated Filmography includes a listing of every Mickey Mouse theatrical film (including ones for other studios and cameos) and Mickey’s television appearances with additional notes. Mickey at the Parks covers the Mickey Mouse attractions, the history of the Mickey Mouse costumed characters, Mickey Mouse ears and more. Speaking of the Mouse is almost twenty pages of quotes about Mickey from celebrities like astronaut Buzz Aldrin to animators like Ward Kimball. Final Word: Walt on Mickey is ten pages of quotes by Walt about Mickey that don’t appear elsewhere in the book.

DG: Do you believe that even serious Disney historians will discover new information by reading it?

JK: Absolutely. Adolf Hitler was given a Christmas gift of 18 Mickey Mouse theatrical cartoons in 1937 because he loved the cartoons so much. There is the biography of Paul Castle who was hand selected by Walt Disney himself to be model for a costumed Mickey Mouse character. The song “Steamboat Bill” was not in public domain and Columbia Pictures (who were distributing the Mickey cartoons in 1931) had to pay a licensing fee of $150 to cover the rights of that music for re-releases of Steamboat Willie. Walt called the Mickey Mouse cartoons where Mickey had no tail the “Bob-tailed Mickeys”.  Mickey Mouse helium balloons sold for thirty-five cents apiece in 1956 at Disneyland.  Guests shouted at the balloon sellers “I can buy an entire bag of balloons for thirty-five cents. You should be giving those to the kids for free.”

4. What are some of the most interesting discoveries you made while researching this book?

JK: One of the most amazing things I discovered was in the rough draft of YOUR new book Disney’s Grand Tour that Walt and Mickey Mouse did NOT receive a special award from the League of Nations.  Lillian Disney in a 1953 interview said, “At this late date, I have no idea whether Mickey is a better name than Mortimer. Nobody will ever know.”  Or Walt said in an interview in 1951, “I’m tired of Mickey now. For him, it’s definitely trap time. The Mouse and I have been together for about 22 years. That’s long enough for any association.”  Every day I worked on this book, I loved it. I discovered something new every single day and it is all in the book.

DG: Are you working on other Disney History-related projects at the moment?

JK: I am gathering material for Vault of Walt: Volume 3. I am also working on two other Disney related books but I never talk about my books until they are done. There were maybe eight people who knew I was working on The Book of Mouse and they only knew because I needed their assistance on something related to the book like the foreword by Ducky Williams. I consider you one of my very best friends and I didn’t even tell you.  IF this book sells well, I do have enough material I couldn’t squeeze into the book to write a sequel called More Mouse. If people want to see that book, they will have to vote with their wallets and buy this book. And don’t forget Vault of Walt: Volume 2!