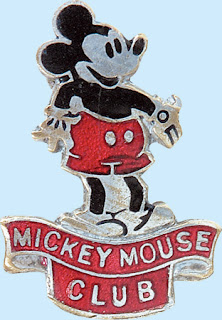 This just in from Jim Korkis (Do not forget to pick up Vault of Walt Volume 2 and The Book of Mouse!):

[On September 13, 1929 at the Fox Dome Theater in Ocean Park, California (managed by Harry Woodin who was the originator of the Mickey Mouse Clubs in the 1930s), it was announced that at the noon matinee “In Person.  Mickey Mouse’s Daddy, the man who originated the world’s most popular sound cartoon character: Walt Disney assisted by Carl Stalling at the piano and U.B. Iwerk (sic), cartoonist.  They’ll show you how they do it, and introduce ‘The Mickey Mouse Theme Song’.  Mothers and Fathers are urged to attend this program.”   Yes, this was just a children’s matinee.

Since 2006, Janet Esteves of Celebration, Florida has held the Guinness World Records book honor of the largest documented Mickey Mouse memorabilia collection in the world.  In 2006, it was 2,100 items and in 2013 the collection was officially 4,127 items that filled her 1,900-square-foot condo. Esteves actually estimates her collection at nearly 6,000 items, but many of them were packed away and unavailable for the final official count.

A survey of American children during the Great Depression uncovered that many kids thought Mickey was a dog or a cat, even though his last name was Mouse.  A 1935 “Time” magazine article stated: “Anyway, a current survey shows that children don’t think of Mickey as a mouse.  A good many of them were asked whether Mickey Mouse is a dog or a cat.  Almost half of the tots answered brightly, ‘A cat.’”

In 1969, it was reported that comedienne Carol Burnett once refused an offer of $500 for her classic 1930s Mickey Mouse watch, a gift from her husband Joe Hamilton.

The 1935 Romanian authorities banned Mickey Mouse films from cinemas after they feared that children would be "scared to see a ten-foot mouse in the movie theatre".

In the film "Bringing Up Baby" (1938), when Cary Grant and Katharine Hepburn are mistaken for bank robbers and ordered to name their accomplices, Grant replies: "Mickey-the-Mouse and Donald-the-Duck".]