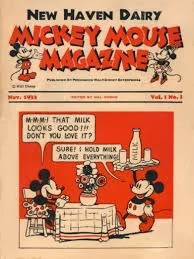 This just in from Jim Korkis (Do not forget to pick up Vault of Walt Volume 2 and The Book of Mouse!):

[The slogan for the 1935 version of the “Mickey Mouse Magazine” was “A Fun Book for Children to Read to Grown-ups.”   Roy O. Disney told publisher Hal Horne that the slogan was accurate because his young son (Roy E. Disney) spent an entire evening at a polo match reading the first issue and pestering his father by reading him the jokes.

“On the walls inside the (Hyperion) studio, in private offices as well as in conference rooms, are framed drawings of Mickey Mouse in every conceivable pose.  Painted on one door in red and gold is a shield bearing Mickey’s Coat of Arms.  The mystic words ‘Ickmay Ousmay” are inscribed on this heraldic emblem and they have puzzled studio visitors a good deal.  But guests who recall a jargon almost universal among American children grin and translate the gibberish into ‘Mickey Mouse’.  This was the language whereby dark secrets were kept from inquisitive adults.”  McCalls magazine  August 1932.
On November 17, 1978, the White House President Jimmy Carter’s daughter, Amy Carter hosted Mickey Mouse’s 50th birthday party for handicapped Washington, DC children. President Carter was there and joined in the singing of Mickey Mouse Club theme song.  Also in attendance was Disney animator Ward Kimball who whipped out seemingly endless drawings of Mickey Mouse for the President, Amy, other guests and even Secret Service agents dressed as clowns.

Emperor Hirohito of Japan was a huge fan of Mickey Mouse. He was given a Mickey Mouse watch as a gift during his special tour of Disneyland in 1975. For years, even on formal occasions, His Majesty was observed wearing the watch. In 1979, there was panic when the watch stopped ticking, and a concerned palace chamberlain rushed it to Tokyo experts specializing in American timepieces.  Fortunately, the watch merely required a new battery.   When Hirohito died in 1989, he was buried at his request with the Mickey Mouse watch.
In 2012, Disney donated more than 100,000 Mickey Mouse plush to the Red Cross to give to children affected by disaster, who have lost everything. “The Mickey Mouse plush bring comfort to those impacted by disaster, which brings a sense of normalcy back into children’s lives,” said Gail McGovern, president and CEO of the Red Cross.]