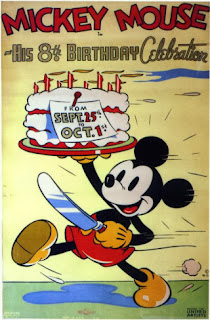 In celebration of Mickey Mouse’s 85th birthday coming up next Monday (November 18), our good friend Disney Historian Jim Korkis, a long time fan of Mickey Mouse, went deep into his personal archives and  will be supplying some “mouse-sized” anecdotes over the next few days (Do not forget to pick up Vault of Walt Volume 2 and The Book of Mouse!):

In 1932, there was a “Mickey Mouse Birthday Party of the Air” celebrated on NBC radio on the night of September 29.  The morning of September 30, George Rector, internationally known restauranteur, went on WJZ and NBC network to announce in honor of Mickey Mouse’s birthday a special (cheese) sandwich that would be featured in all A&P stores.

Mickey's fifth birthday was celebrated on September 30, 1933 with a Hollywood testimonial party where the speakers included Charlie Chaplin, Mary Pickford and Will Rogers.
On Mickey’s eighth birthday in 1936, it was released to the press and printed in “The Literary Digest” (October 3, 1936) that 468 million tickets were sold to his cartoons in 1935.

In 1937, on his ninth birthday, The Boy Scouts of America bestowed upon Mickey membership in the Cub Scouts.

A "record-reader" was a two-record set accompanied by a storybook and some cue, like the sound of a bell or a horn, to let a child know when to turn the page so that the sounds on the record would match the story in the book (in this case, Mickey Mouse coaxed Donald Duck to give the signal to turn the page). The voice of Mickey Mouse was provided by... Stan Freberg.

Mickey Mouse was the first animated character to receive a star on the Hollywood Walk of Fame in November 13, 1978 in honor of his 50th birthday that year.  It is located at 6925 Hollywood Boulevard in front of Grauman’s Chinese Theater.

Yes, of course. I was planning to post this yesterday and then decided to post Jim's interview instead.