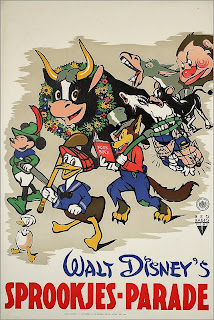 This just in from Hans Crezee:

[I see you just posted the poster for a compilation program entitled "La Grande Parade de Walt Disney" that premiered in March 1940 in France. Would you believe it that I have a one sheet poster for a very similar compilation program entitled 'Walt Disney's sprookjes-parade' that premiered in the Netherlands in April 1940? As you can see that program also included 'Ferdinand the bull', 'the Practical pig' and 'the brave little tailor'. You can also see that the local RKO office apparently hired some less competent artist to do the artwork.]