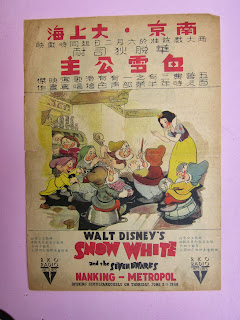 This just in from Hans Crezee:

[I see you noticed the unusual Chinese Pinocchio program on eBay. The main reason why I bought it is that I already had a Snow White program from 1938 from the same cinema in Nanking. Imagine, this is one year after the rape of Nanking in 1937! The Pinocchio program has 24 pages with the storyline and also serves as a collector's album as the idea was to paste in (colored?) Pinocchio pictures from some Chinese brand. The color ad on the back is also interesting: this American company of Henningsen apparently had a factory in Shanghai, and I have an ad for their Snow White Eskimo Toffee, but unfortunately very small and in black and white.] 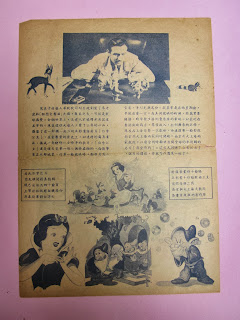