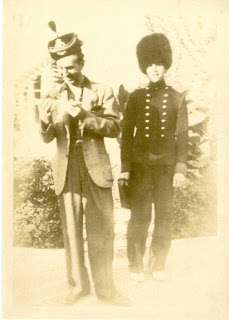 This just in from Ed Ovalle from the Walt Disney Archives:

[The picture you recently purchased of Walt and the man who was a member of the Mickey Mouse all-cartoonist band does not appear to be Errol Gray as Mark Sonntag thought.
I believe that it could be James (Jamie) Escalante. We have a picture of the band and Errol Gray is wearing an entirely different uniform and the person sitting next to him wearing the grenadier hat and looks like James (Jamie) Escalante.
I have even seen a website that is maintained by Errol Gray's son who has the same picture and identifies the person as his father, Errol Gray.

The only problem is our personnel card lists James Escalante start date as 1/1939. In any case, I feel confident that the person next to Walt is not Errol Gray.]