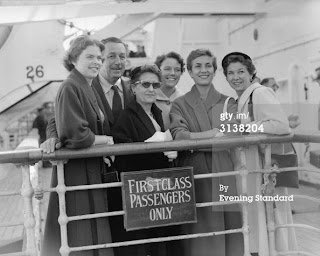 Gunnar Andreassen notes that the "mysterious" woman on the photo of Walt in London which I posted last week is most certainly Majorie Sewell Bowers, Walt's niece.

[The caption of this Getty Image from the same trip reads: "1952: American cartoonist and filmmaker, Walt Disney (1901 - 1966) with his wife and two daughters, Sharon and Diane and Karin Bergstrom, on board a ship." (It looks like Diane Disney and Karin Bergstrom were "classmates":  University of Southern California - see El Rodeo Yearbook 1952, link here http://www.e-yearbook.com/yearbooks/usc/1952/Page_200.html) And in The Cute Walt Story That Never Was by Jim Korkis, we read: "In 1952, Walt took five women to Europe—Mrs. Disney, the daughters, a niece and a friend of Diane’s. On this trip he taught them to reach for what they wanted."]