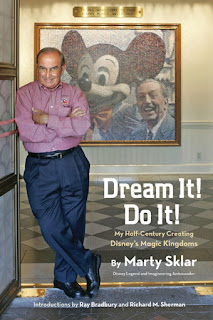 I have just spent a large part of this weekend reading an advance copy of Marty Sklar's autobiography, Dream It! Do It!

This is a must-have, of course, especially if you are intested in the history of the Disney parks from the New York 1964 World's Fair to Hong Kong Disneyland.

This is also a very problematic book, unfortunately, for many reasons. The main one is that the content is way too sketchy. Granted, it would have taken a minimum of ten volumes of the same size for Marty to recount more than 50 years working for Disney, and one is bound to be disappointed by how short the book is. But what makes things much worse are two huge issues in the book:

- Marty spends a lot of time re-explaining many facts that are obvious to anyone who has read even the most basic books about the history of the Disney parks and reminding us of well-known stories told often already.

- What is even worse, Marty quotes at length (and I really mean at length), in several chapters, from autobiographies of various of his colleagues, including Jack Lindquist, Michael Eisner, John Hench, etc. To say that this is puzzling would be an understatement. (On a side note, in the Disneyland Paris section of the book, Marty quotes from an interview which I conducted more than 10 years ago with Tom Morris and introduces that quote as "Tom Morris speaking to D23" - since the quote was used in my recent article about DLP in Disney Twenty-Three this is technically correct but nonetheless frustrating.)

Don't get me wrong, there are quite a few new stories in the book, especially in the World's Fair and EPCOT sections, and I was pleasantly surprised by how candid Marty was when it comes to discussing some of the politics between Dick Nunis and him, or Paul Pressler and Cynthia Harris.  And the three photo sections are pure delight.

I hope that Marty will not consider this book as his final contribution to Disney History but will soon grant an interview to one or to several historians equipped to conduct lengthy oral histories with him (even if those interviews were to be released only "after Marty.")

If the book serves as a starting point, then it will serve its purpose well.
Posted by Didier Ghez at 12:07 AM

Sad to hear this. I had very high hopes for this book.

Don't get me wrong though. It is still a must have and contain quite a few great stories.

I appreciate the review. I'm still looking forward to Marty's book and definitely look forward to the read.