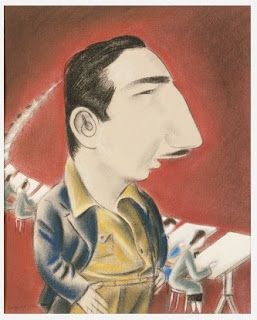 [In October 2011, Gunnar Andreassen posted this wonderful pastel sketch of Walt by the Bolivian painter, muralist, illustrator and caricaturist, Antonio Sotomayor (1904-1985). The drawing is in the collections of the National Portrait Gallery, Washington, D. C., on whose website it’s dated “ca. 1935.”

That approximate dating is confirmed by the fact that a caricature of Walt, presumably the same one posted by Gunnar, was among thirty-nine caricatures of famous people exhibited by The Renaissance Society in the Goodspeed Galleries of the University of Chicago from July 1 to July 31, 1941 (http://www.renaissancesociety.org/site/Exhibitions/Works.611.htmlhttp://www.renaissancesociety.org/site/Exhibitions/Works.611.html).

The subjects in the show ranged from Franklin D. Roosevelt and Clark Gable to Salvador Dalí and Disney to Hitler and Mussolini.

In 1942, the Illinois Art Gallery, on Michigan Avenue in Chicago, exhibited a similar number of caricatures by Sotomayor. A reviewer for the Chicago Tribune remarked, “His show is one of the most brilliant, intelligent and witty we’ve come across in ages.” Many of the subjects included in the Goodspeed Galleries event appear to have been included in this exhibit as well, among them, presumably, the caricature of Disney now at the National Portrait Gallery.

Though born in Bolivia, Sotomayor arrived in San Francisco as a very young man, not yet twenty years old, in 1924. He spent the rest of his life there, contributing drawings to the San Francisco Chronicle among other publications. In 1988, his widow, Grace Sotomayor, donated his Papers to the Smithsonian Institution.]
Posted by Didier Ghez at 12:02 AM