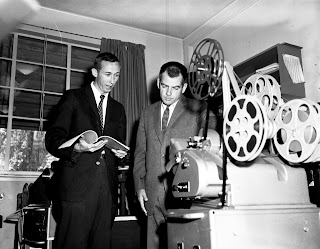 This just in from Howard Green:

[Here is the just completed obit for Stormy Palmer, along with a nice picture of him with Roy.

(March 27, 2012- Burbank, CA) - Veteran Disney film editor Norman "Stormy" Palmer passed away on Saturday, March 23 at his home in Northridge, California from age-related natural causes.  He was 94 years old.  Palmer worked at The Walt Disney Studios for 45 years, and became closely associated with the acclaimed series of "True-Life Adventure" films.  Among the popular titles in that series that he edited are "The Living Desert," "The African Lion," "Beaver Valley," "White Wilderness," and "Nature's Half Acre."  He also served as editor on such classic Disney live-action films as "Ten Who Dared," "The Incredible Journey," and "The Gnome-Mobile," and has more than 20 editing credits on the Disney television anthology series.  Palmer served as a mentor to the late Roy E. Disney, who began his career in the Studio's Editorial department and went on to help guide the Company as vice chairman and head of animation for two decades.
"Stormy was one of the key players in creating the classic Disney True-Life Adventures series, and he was a true pioneer in the field of nature documentaries," says Dave Bossert, Producer and Creative Director at Walt Disney Animation Studios, and the producer (along with Roy E. Disney) of the True Life Adventures DVD collection.  "He took tens of thousands of feet of raw footage and was able to craft it into some of the most riveting, beautiful, and entertaining nature films ever created.  That series of Oscar®-winning films set the gold standard for years and helped to inspire the many generations of nature filmmakers that followed."
Palmer was born on October 7, 1918, in Santa Ana, California.  A fourth-generation Californian, he graduated from Hollywood High School in 1937, and headed north to Oregon to become a ranch hand and learn how to ride horses.  The following year, in 1938, he got a call from the Disney Studios, where he had earlier applied, and soon found himself with an entry-level job as a staff projectionist.  After six months, Palmer moved into the Editorial department, where he assisted on such animated classics as "Pinocchio" and "Fantasia."
During World War II, Palmer worked with director John Ford in the field photo branch of the U.S. Navy, and edited films for the Joint Chiefs of Staff in Washington D.C.  He also served an overseas stint as an aerial photographer on numerous surveillance missions.
In 1946, Palmer returned to Disney's Editorial department, where he met and fell in love with Barbara Major from the Ink and Paint Department.  They were married on December 4, 1947, and remained devoted to one another through 52 years of marriage.  Barbara passed away in 2005.
In 1953, Palmer received his first feature film credit on the Academy Award®-winning True-Life Adventure classic, "The Living Desert."   He had previously worked on "Beaver Valley," "Nature's Half Acre," and "Water Birds."  He went on to edit many other films in that acclaimed series including "The African Lion," and "White Wilderness."  He also edited "Grand Canyon," the 1959 Academy Award® winner for Best Live-Action Short.  The innovative CinemaScope film was a pictorial interpretation of Ferde Grofé's famed "Grand Canyon Suite."  For the 1952 Oscar®-winning True-Life featurette, "Water Birds," Palmer used Liszt's Second Hungarian Rhapsody to great effect in capturing the mood and adding entertainment value to the film.
Disney's bold entry into television provided more great opportunities for Palmer to explore his talents as an editor.  He worked on more than 20 episodes for the long-running anthology show ("Walt Disney's Wonderful World of Color" and other titles), from the mid 1950s to the early 1980s.  His television credits as an editor include "Atta Girl, Kelly!," "The Best Doggoned Dog in the World," and "One Day at Teton Marsh."
As a feature film editor, Palmer made his mark on such popular Disney fare as "Ten Who Dared" (1960), "The Legend of Lobo" (1962), "The Incredible Journey" (1963), "The Gnome-Mobile" (1967), and "The Shaggy D.A." (1976), among others.
Palmer retired from The Walt Disney Studios in 1983, and devoted his leisure time to sailing, golfing and woodworking.
He is survived by two daughters -- Christine Thomson of Salem, Massachusetts, and Lindsey Palmer of Santa Ynez, California -- and two grandchildren, Amanda and Colin Sebern.  A third daughter, Laurie Palmer, passed away in 2012.  Funeral services and cremation will be private.  In lieu of flowers, donations can be made in the name of Stormy Palmer to Southern California Hospice Foundation (Simi Valley Branch) at www.socalhospicefoundation.com]