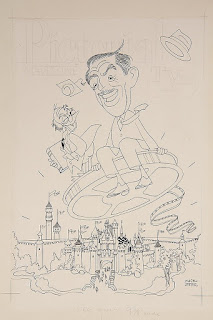 This caricature of Walt was sold recently in an auction. The catalog description read:

[PEN & INK ILLUSTRATION - Caricature by George Wachsteter (1911-2004) of Walt Disney, for the Sept 1, 1963 season premiere of NBC-TV's 'Walt Disney's Wonderful World of Color'. This durable family TV staple had its beginnings over ABC in 1954 as 'Disneyland' & later as 'Walt Disney Presents' in 1958. The series moved to NBC in 1961 and was retitled 'Walt Disney's Wonderful World of Color' to capitalize on the dominance of color programs on NBC. The series under various names has endured as a fixture on television ever since. On 14" x 22" illustration board, for the cover of the Sept 1, 1963 New York Journal-American TView Magazine, original copies are included. 14" x 10" image. Edge toned and soiled, image is fine.]

Thanks to Gunnar Andreassen for the heads up. 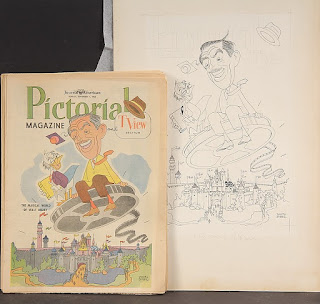