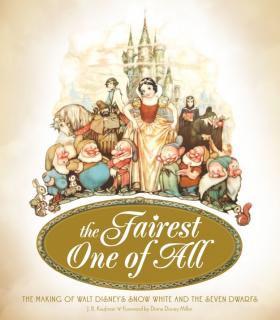 What are the best Disney history books of 2012? This year's list is a long one (which is good news) and includes for the first time a book in Italian (although, had I been aware of it at the time, the book Eccetto Topolino by Fabio Gadducci, Leonardo Gori and Sergio Lama would have been part of my 2011 list).

1. JB Kaufman, The Fairest One of All: The Making of Walt Disney's Snow White and the Seven Dwarfs published by Weldon Owen; 2012.

2. Rolly Crump and Jeff Heimbuch, It's Kind of a Cute Story published by Bamboo Forest Publishing; 2012.

4. Jim Korkis, Who's Afraid of the Song of the South? and Other Forbidden Disney Stories published by Theme Park Press; 2012.

7. Ron Schneider, From Dreamer to Dreamfinder: A Life and Lessons Learned in 40 Years Behind a Name Tag published by Bamboo Forest Publishing; 2012.

Terrific list! I've read about all, and my fave is "It's Kind of a Cute Story." Rolly seems to have had a one-of-a-kind relationship with Walt Disney, on top of that Rolly's unique personality shines through in the book. My only complaint is I've of liked to have seen even more of Rolly's artwork.

Thank you!
I'm proud to be in the list, as co-writer of the first Italian Disney book in the list!
Ciao, Didier!

Great list. I have at least half of them now and can say they are incredible. Good to see an italian book in the list. Congrats Luca Boschi.