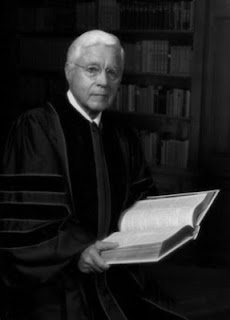 This just in thanks to Jim Hollifield:

[Rev. Glenn Puder, married to Walt's niece, Dorothy, died December 19, 2011 at age 100. The news seems to have gone unreported, which is odd, given the fact that he was featured on the Disneyland opening broadcast and was related to Walt by marriage. I'm forwarding his obituary just in case you hadn't seen it. The piece contained some good biographical material.


"Reverend Glenn Darrell Puder, D.D. 1911 - 2011 The Reverend Glenn Darrell Puder, D.D. died early Monday, December 19th, in bed at his home at Aegis of Napa, Napa, California. Dr. Puder served for many years as Pastor of Bakersfield's First Presbyterian Church. Born November 10, 1911 in Ottumwa, Iowa, Glenn lived his first decade on his family's Iowa farm. Seeking better schools for Glenn and his younger brother Bill, the family moved to California in 1923. Glenn attended Fremont High School and Occidental College in Los Angeles. Entering at age 15, Glenn was youngest of his class at Oxy. Decades later, the College honored Glenn for his service with an honorary Doctor of Divinity. The Puder Family has endowed a scholarship for religious studies at Occidental. He claimed a calling to religious work at the age of 12 and fulfilled his dream of becoming a Presbyterian minister by earning a Master of Divinity degree from both Princeton Seminary and San Francisco Theological Seminary at San Anselmo. Glenn soon met another Oxy student, Dorothy Disney; they married on June 10, 1937 and were together for over 70 years. The young pastor and his wife were called to serve at Immanuel Presbyterian Church in Los Angeles. Daughter Linda and sons David and Paul were born during this time. After 15 years the family moved to Bakersfield, just in time for the Great Earthquake of '53. The church was completely destroyed and Glenn and Dorothy worked as a team with the growing congregation to rebuild and expand First Presbyterian Church of Bakersfield. Many busy and productive years were spent in this Central Valley community. Glenn became known as ""The Pastor to the City,"" serving as Chaplain for the Police Department and the Memorial Hospital. After his retirement, he and Dorothy remained in Bakersfield and continued to be involved in the life of the City. One of his life's many highlights was delivering the invocation at the Opening of Disneyland in Anaheim, at the invitation of his wife's uncle, Walt Disney. In 1995, the Puders moved to Napa Valley to live among vineyards near their wine-growing daughter and her husband. The Puders found many new friends at First Presbyterian, St. Helena. Glenn volunteered his time to St. Helena Hospital, Napa Valley Museum, and taught Bible study classes. Dorothy passed away in September '07. After moving to Aegis of Napa, Glenn continued to counsel friends and strangers alike; and many sought and all welcomed his counsel and loving prayers. Survivors include: daughter Linda and family, and son David and family, all of Honolulu; daughter-in-law Nancy (widow of second son Paul) and family of Mendocino. Glenn and Dorothy were devoted to their seven grandchildren and five great-grandchildren of Honolulu, Mendocino, Malibu and Santa Rosa. A small private family service will be held in the Spring. Glenn's ashes will be placed in the family plot in Mendocino, joining wife Dorothy and son Paul. Gifts in Glenn's honor would be welcomed at Occidental College, The Presbyterian Foundation, or any cause of your choice that promotes love, peace, and kindness."]