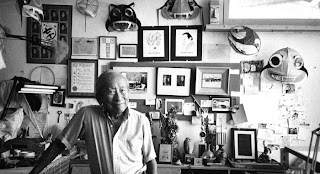 Here is a project which I believe is definitely worth supporting (I contributed financially to it last week):

As family and friends gather together this week to give thanks, I want to give my personal thanks to all of you who have been supporting my documentary film, Tyrus Wong: Brushstrokes in Hollywood - the first in-depth portrait of 102-year old pioneering Chinese American painter, Hollywood illustrator, kite builder and Disney legend, Tyrus Wong.

While I’ve asked for your support in the past, this marks a very special time.

After many years of in-depth research, development, and filming, the film is now in post-production. This means the finish line is clearly in sight! I’m now writing to ask for your help to reach and cross that line.

I'm thrilled to announce the launch of a KICKSTARTER campaign for my film. This online funding campaign ends on Dec 18th, so please visit the site and give as generously you can. Every dollar counts and there are rewards to be had!

If you prefer, you can write a check to my non-profit fiscal sponsor:  “VISUAL COMMUNICATIONS” (be sure to write “Tyrus Wong” in the memo) and send it to:

In other news...
TYRUS RECENTLY APPEARED AT THIS YEAR’S CTN ANIMATION EXPO
Tyrus is still going strong at the age of 102 and made a rare appearance at the CTN Animation Expo in Burbank, where I spoke on a special panel and showed excerpts from the film.
Read more about the event in this article from Animation Magazine
http://www.animationmagazine.net/events/tyrus-wong-documentary-launches-on-kickstarter/

Thanks again for your support! (My apologies if you’ve already received news of this.)