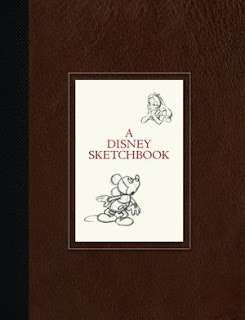 To say that A Disney Sketchbook is a disappointment is an understatment. We have been awaiting this book for years, which might be part of the issue. During all those years we have come to imagine that the delay was due to an effort to improve the content to make it unbeatable. Not so, unfortunately. "The concept for this publishing project", according to the authors, "was to build a sketchbook that may have been passed around The Walt Disney Lot, one in which artists have studied each other's work over very different period of times." OK, I buy this. It could definitely work.

A sketchbook concept opens the door to many ideas: collecting astounding drawing by Horvath, Hurter, Hall and other concept artists; showing weird gag drawings, letting us discover never seen before concept art, getting access to very rough animation studies by the best Disney artists of the Studio throughout the years and on we go.

Instead of all of this, we get a selection of drawings which we have seen a million times before, with no artists credited anywhere. Weird. And the worst part is that this book could at least collect hundreds of drawings, but instead limits itself to very few, blown up to fill up large pages.

Enough complaints for today. Disney Editions has brought us many beautiful books in the past and a mistake can happen from time to time. I have a feeling that the new volume of The Archives Series will be way more exciting and will make us forget this strange sketchbook.
Posted by Didier Ghez at 12:02 AM

What a shame, guess I'll have to take a look through it, and only purchase it when I find it used for super cheap. However, I must agree with your final sentiment in the review, they can't all be zingers.

It feels like this book has been sitting in my Amazon Wish List for years. Then, I saw a preview page a few weeks ago and my heart sank. From your review it sounds like this book is not aimed at the serious fan / collector. With so much material to pull from the Disney Archives, it's a shame they opted for a quick buck.