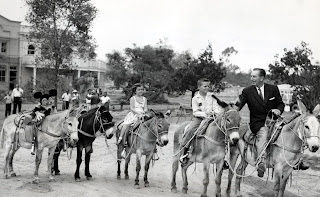 In the Summer of 1956, Walt did a series of interviews with journalist Pete Martin for articles that would appear in the SATURDAY EVENING POST and later be combined into a book THE STORY OF WALT DISNEY.   Here are Walt’s unedited thoughts about the business behind Disneyland:

PETE MARTIN:  Let's talk a little about Disneyland and how it's so different from other amusement parks.

WALT:  It really takes a person more than a day to see the park without exhausting themselves.  And as I get these new things in, it's going to take more time.  It's one of those things that people who come in here for the first time and everything's there and they sort of make a hog of themselves, you see?  Well, a lot of people come back the third time and just like to sit and listen to the band, see the horses going around.  I like to go down and sit by the river and watch the people.

Chewing gum sticks up things so we don't sell it.  And peanut shells.  We sell the unshelled.  But shelled peanuts, they just crumble them and throw them all over the place.  And nothing with round sticks.  People trip on them.  The ice cream bars got flat sticks and I won't sell any of this spun candy because the kids get it and get it all over everything and people get it on their hands.

No liquor, no beer, nothing.  Because that brings in a rowdy element. That brings people that we don't want and I feel they don't need it.  I feel when I go down to the park I don't need a drink.  I work around that place all day and I don't have one.  After I come out of a heavy day at the studio sometimes I want a drink to relax.

When it comes to Disneyland, I feel I've given the public everything I can give them.  My daughter, Diane, says that I spend too much time around the house talking about how I can give them more for their money when they come to the park.  You've got to build.  You've got to keep it clean.  You don't want to walk in a dirty toilet.  I won't have 'em.  My toilets are spic and span.  And you know another thing, I have to have police so there's no child molesters there. I've got plainclothesmen.  They can leave their kids to run around and I have safety inspectors.  It's run in a high class manner and I have a high class clientele.  The people who go to the park are from all walks of life but they look like solid Americans. That's pretty high class.

(Even in 1956, Walt was getting complaints about the high cost of getting into Disneyland.  An adult ticket cost a dollar--nine cents of which went directly to taxes--and a child admission cost fifty cents.  On top of that, people bought individual tickets for rides.  Walt introduced the concept of ticket books so you got more rides for the money you spent on the book than if you bought each ride individually.)

PETE MARTIN:  One of the things we should cover is to knock off that rumor that Disneyland's expensive to come to.

WALT: Oh, no.  Not at all.  That's an old hat thing.  You hear it from some people because they don't know what else to say.

By the time this article comes out, I'm raising it to two dollars because I'm adding all these new rides.  And to extend my ticket book to take care of the rides, I'm putting this to ten rides for two dollars.  Figure it out.  It averages twenty cents a ride, doesn't it?  It would cost an adult three dollars and a junior two dollars and fifty cents to get in and get ten rides.  If they don't want that, they can pay their buck and pay their fifty cents for their kid and they can come in.  They can sit on the park benches, take up the space, dirty up my toilets, litter up the street. They can do all of that if they pay their dollar-fifty.  They can ride as they want to.  They can sit around and hear my band; they can visit my free shows.  They can do all that and more for their dollar-fifty.

You can't go in a state park without paying that.  See, you've got to pay something.  You pay so much a head or so much a car to go in a state park. We even have to pay government tax on admission.  So it's really ninety-one cents to get in.  Now that's what it amounts to.  You can't go to the circus for that.  I tell you the complaint about the prices are malicious. Los Angeles is made up of a lot of different characters.  How do I know they might not be more interested in some other thing like Marineland? Or some other type of amusement that is competitive.  We are competitive, too.  Who knows?  But there's no foundation for some of these complaints about price.  When people make that remark to me, it just sounds to me like they heard it somewhere and they don't know what else to say.  How can they compare Disneyland prices with anything else because there is nothing else like it.

Well, you take you children to Disneyland and for a dollar and a half they get in and spend a whole darn 13 hours if they want to.  Now, if you want to go in and buy them expensive toys or you want to buy them bathing suits or your wife happened to go along and sees a wonderful woolen skirt that costs $30.  Well, people come out and spend all that money.  But they don't think twice of going down to Bullocks Wilshire and spending that much on a skirt. If you go into a Broadway Department Store, you can go in and spend $25 or $30.  I'm not insisting people buy things but I want to give them the opportunity.

So I have to keep improving on ideas.  On the jungle ride, I want to get more animation in the animals.  I want to really fix it.  My monkeys have gone to pot.  And I want new monkeys.  I'm going to take them out Monday because I'd rather not have them in there looking like that.

I think I'm going to make "My monkeys have gone to pot" my new catchphrase.