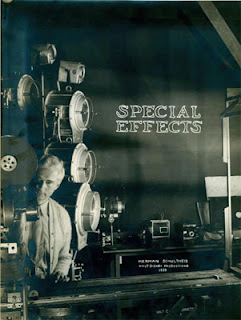 [John Canemaker has just completed the manuscrpt of an exciting new book project to be published by The Walt Disney Family Foundation Press, titled Secrets of Disney Movie Magic (1938 - 1941): Herman Schultheis and his Special Effects Notebooks. The book is expected to be published in late 2014.

Herman Schultheis (1900-1955) was a German-born engineer who worked at the Walt Disney Studios during the its most ambitious period of animated feature production. He worked in the studio's Process Lab, which created the special visual effects for Pinocchio, Fantasia, Dumbo and Bambi.

An avid photographer, Schultheis meticulously documented the work of the Process Lab in several large-format notebooks, detailing how they accomplished the dazzling effects imagery that still amazes audiences today. His hand-printed commentary and photographs offer a rare look at the state of the art in special effects during this important era at the Disney studio.

Schultheis left Disney in the early 1940s, and his notebooks remained unknown until his widow's death in 1990. They have since been acquired by The Walt Disney Family Museum, located at The Presidio in San Francisco, where the Special Effects notebook is on permanent view in an extraordinary interactive digital display.

In this new book, John Canemaker interweaves the life story of the enigmatic Schultheis with a close analysis of the notebooks' content, and the many people who worked with Schultheis at Disney.]

Quite an interesting story...the Los Angeles Public Library has a large collection of photos of the Los Angeles area that Herman took in teh late 1930s of architecture, landmarks, and general everyday life. If I recall the notebooks were found in the Schultheis home by a charity to whom the widow had left the residence to, along with some 1930s Mickey Mouse books. A lengthy article about the notebooks plus photos was published in the March/April 1996 edition of Print magazine. To see what the Museum did with the material is amazing - they digitized the info and made it available to visitors - one could easily spend an hour just looking at the digitized book - an amazing and fantastic document. I can't wait to get John's book.

The Walt Disney Family Museum displays the Schultheis Book itself, the digital access version is truly brilliant, created by Portland, OR-based creative group Second Story. It is no exagerration when David says that hours can be spent just looking at that amazing piece, brought to life in such an innovative way.

This is great news!!! Looking forward for it!

Cool, but wish they could have gotten a better writer to put it together. I just don't fall into the camp that thinks Canemaker is a very good one (or even a very good historian).