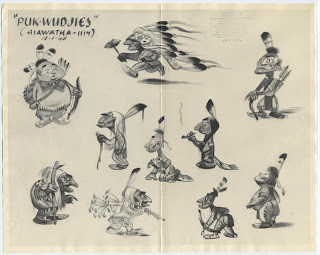 This great model sheet was sold by Howard Lowery last week. According to the caption:

[This photostat model sheet titled "Puk-wudjies (Hiawatha - 1114)" was made at the Disney Studio during story development of an animated film based on The Song of Hiawatha, the epic 1855 poem by Henry Wadsworth Longellow. For many years after release of Little Hiawatha (1937), Walt Disney kept the story in development for a future animated feature. This model sheet was issued "12-1-'48" and shows a Disney story artist's concept drawings of "the mischievous Puk-wudjies," a tribe of pygmy Indians who conspire to defeat "the Strong Man" Kwasind in the poem's 18th stanza]

It might have been based on early concept drawings from artist Holling C. Holling dating back from 1944.
Posted by Didier Ghez at 12:02 AM