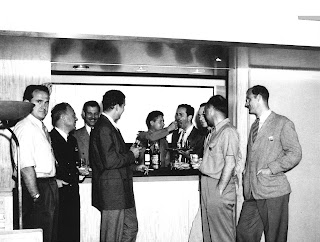 Jim Korkis interviewed recently two of the daughters of Ham Luske (Carol and Peggy) as well as Luske´s son, Jim. Carol and Peggy were kind enough to send me several elements related to their father, which I will post on the blog over the next few weeks.

Michael Barrier sent me the following information about the above photo, which comes from the Luske family:

[Ed Benedict had a print of that photo with full IDs and the date it was taken (July 12, 1943). The occasion was a going-away party for a naval officer who had been working at the studio. These are Ed’s identifications, left to right: Ken Peterson, Captain True, Harry Tytle, Riley Thompson, Lieutenant (?) Newton, Walt, Commander Barry, Mac Stewart, Ken O’Connor.]
Posted by Didier Ghez at 12:02 AM