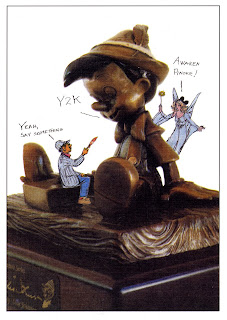 This just in from Göran Broling:

[As you know I have a lot of Ollie's Christmas cards. I guess I received every one from 1978 until he had to quit making them himself just a couple of years or so before he passed away...

For the Christmas card in 1999 Ollie chose to use a photo of a Pinocchio bronze figurine, and pasted in a drawing of himself instead of Jiminy. His dear wife Marie became the Blue Fairy, always drawn with Mickey Mouse ears(!)

As a bonus Ollie also included a very interesting photo of himself and the sculptor, Disney artist Bruce Lau. The photo is from Ollie's home, and it seems that Ollie together with the sculptor are discussing the final approval look on the model used for making the figurine. As a mather of fact I even recognize what the model is standing on. It is Ollie's cookie box, because I have had cookies from that very same box at the same place with Ollie in 1998. :) Bright memories, I can tell you that!] 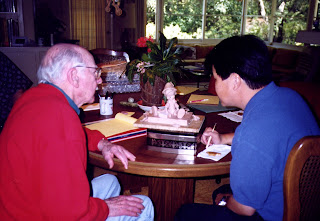 This as with most posts on this blog had me wanting to see more of these cards. I was rewarded after a quick internet search.

Thanks for a great Holiday treat Göran.