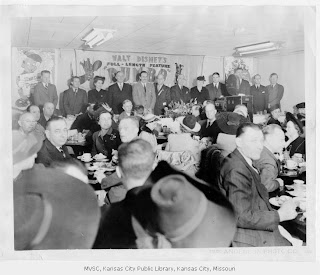 Reader of the blog FrenchDisneyFan, just sent me a link to this marvelous photo that I had never seen before and which he found in the Kansas City Public Library website.

I located this image around 6 months or even maybe a year ago...I can't remember. I was going to publish it on my Toons At War blog, but first I wanted to find out more info behind the meeting. I'll have to check my notes to see what I discovered at the time. One thing that always piqued my interest was the film camera, which can be seen in the right side of the photo - count three people in from the right and you can see it with the big canister on top of the camera. At the time, this led me to believe the event was filmed. I wondered why, and for what reason... and still do! There is film for this event somewhere...we just have to figure out where!