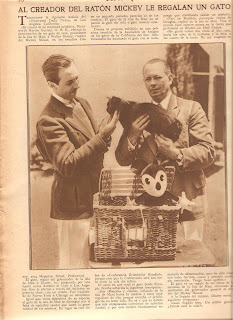 I picked up last week a copy of the Spanish magazine Popular-Film, dated August 17, 1933, and was delighted to discover this great photo of Walt, which I had never seen before.

The story itself is famous: the English consul in Los Angeles, Wentworth Martyn Gurney, O.B.E. gave to Walt a cat named Manxie from the Isle of Man as a special gift from his majesty. Apparently the hidden agenda was to try and get Disney to include a Manx cat in one of his cartoons.
Posted by Didier Ghez at 12:02 AM

Thanks for posting Didier. Have you noticed the negative number which wasn't completely cropped at the bottom right? Looks like an official studio released photo.

Correct. The ceremony took place at the Studio. That being said I don't believe this photo has ever been released before in any book or magazine, save this Spanish one and an American magazine called Illustrated Daily News from which the article was translated.