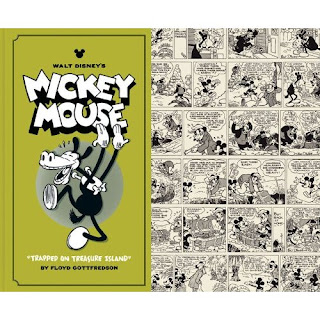 I have just received my review copy of Walt Disney's Mickey Mouse: "Trapped on Treasure Island" and as amazing as it sounds David Gerstein and Fantagraphics have managed to do it again: they have produced at the same time the best Disney comic book of 2011 and one of the best Disney history books of the year. This series through the quality of its articles and the never-seen-before documents it contains is a treasure trove for all of us Disney comic book and Disneyana fans. My favorite "extra" features include the detailed bios of Webb Smith, Ted Osborne, and Merrill de Maris by Alberto Becattini and David Gerstein.

Did I mention that I can not wait for volume 3, Walt Disney's Mickey Mouse: "High Noon at Inferno Gulch"?
Posted by Didier Ghez at 12:02 AM

This collection is amazing. Would have liked the strips to have been a little bigger, but then again... not the overall size of the book(haha!)