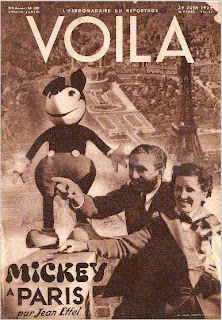 This French magazine, which I acquired many years ago while still living in Paris, was released on June 29, 1935 to celebrate Walt, Lillian, Roy and Edna's arrival in the "city of lights" just a few days earlier. The cover image combines two photographs: the photo of Walt and Lilly was taken a few weeks earlier, on June 12, in London, on the roof of the hotel where they were staying, the Grosvenor House.

I have recently written a very in-depth, 50-page-long essay which covers the whole trip and which should be released soon on Paul F. Anderson and Todd James Pierce's Disney History Institute blog. I will let you know when this happens.
Posted by Didier Ghez at 12:18 AM

Can't wait. I think I have some photos from that trip.