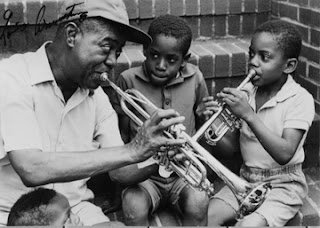 Disney Historian Jim Korkis recently came up with two questions that might intrigue readers of this website:

1) In Orlando, a theater company is producing a one man show about the life of trumpeter Louis Armstrong. In the publicity, they mention that a lot of the research for the play came from unlimited access to the Louis Armstrong House Museum in Queens, New York that houses over 650 reel-to-reel tapes that Armstrong recorded over the years about his life. My question is "Is there anything in those tapes where Armstrong discusses Walt Disney or Armstrong's work at Disneyland?"

2) There has been a lot of discussion about Disney's plans to include an "Avatar" themed area at Disney's Animal Kingdom. My question is "How long will it be before someone starts to claim that the inclusion of the blue creatures in the film were actually inspired by Walt's idea as evidenced by the PEOPLE AND PLACES documentary Walt made on the Blue Men of Morocco?" (For those who are curious, the blue skin coloring actually comes from the staining of their skin from the blue clothing they wear.)
Posted by Didier Ghez at 12:26 AM

Ricky Riccardi works at the Louis Armstrong House Museum and is the author of a recent book on Armstrong, What a Wonderful World: The Magic of Louis Armstrong's Later Years. I don't have the book, so I don't know if there is any Disney-related information in it. However, Riccardi has a blog (http://dippermouth.blogspot.com) and you can email him at dippermouth@msn.com.

Thanks Mark. Will do.