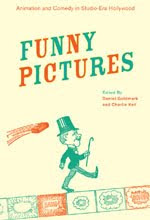 Jim Korkis reminded me yesterday that I had forgotten to mention this newly-released book on the blog. I learned about it a few days ago through a review by Jerry Beck on CartoonBrew and definitely looks like a volume I will soon pick up. Here is what Jerry said about it:

[Funny Pictures: Animation and Comedy in Studio-Era Hollywood (University of California Press), edited by Daniel Goldmark and Charlie Keil, is a fascinating collection of essays by noted animation historians and academics, exploring the link – from the outset of the medium to today – between comedy and animation. Fourteen pieces in all, including J.B. Kaufman comparing Disney’s characters to Chaplin and silent comedians; Mark Langer putting Fleischer’s early films in context to Vaudeville and comic strips of the era; Donald Crafton observing the effect of Hollywood cartoons on Depression era audiences; Linda Simensky on the influences of classic cartoons and earlier animators on the TV cartoon creators of today; and Daniel Goldmark writing about “funny music” in funny cartoons. This one is aimed at the scholarly – but is highly recommended (by me) to all! ]
Posted by Didier Ghez at 12:33 AM