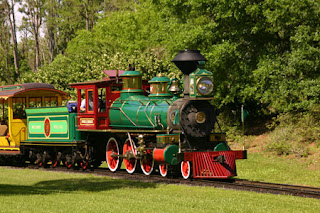 Walt Disney World Marketing needed an authority to promote the "Magic Behind the Steam Trains" tour at the Magic Kingdom so Disney Historian Jim Korkis was brought in to write and narrate a short video about the wonders of trains at the Magic Kingdom. Here is the link.

Jim Korkis will be doing a presentation on the Creation of Walt Disney World with Jim Hill on Wednesday July 13 at the Disneyana Fan Club convention at the Crowne Plaza Hotel in Anaheim followed by an appearance on a Disney author panel.
Posted by Didier Ghez at 12:40 AM