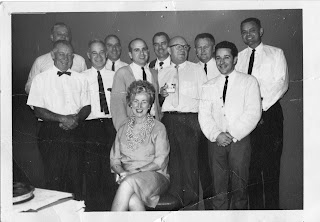 This photo just in from Julie Svendsen.

Joe Hale, who saw it this week sent the following information:

This is a picture of Ham Luske's Unit when they were doing WW of Color TV shows. Probably was taken in the mid-60's. Ham was the Director. Svendsen and Stevens were the Animators, Boyd was the Effects Animator. Elmer Plummer & Jimmy Trout were BG Painters.
Jim Swain was the Asst. Director. Joe was the Layout Man, Mac Stewart was co-Director, and John Emerson also did special effects work.]

My sincere thanks also to Hans Perk and Floyd Norman for helping solve this small mystery.
Posted by Didier Ghez at 12:13 AM