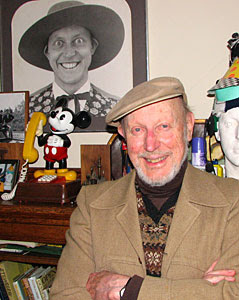 This just in from Leo Holzer:

[We're saddened by the death of a true one-of-a-kind Disney Legend, Wally Boag, a comic song-and-dance man who probably "lost" more than a million teeth in his record run at Disneyland's Golden Horseshoe Revue. He performed at Walt and Lillian Disney's 30th anniversary party a scant few days before Disneyland opened to the public and the show became one of Walt's favorite things to show off to famous visitors. He was also the only performer allowed to sell his own line of merchandise at the park. Does anyone remember or still have "Boagalloons"?

Betty Taylor has also passed away, a day after her fellow "Golden Horseshoe Revue" castmember. She was in the show the longest, joining it in 1956 and remaining until its final performance in 1986.]
Posted by Didier Ghez at 1:10 PM

Always on, Wally kept us laughing even at the sometimes stuffy Disney Legends ceremonies.

In the sixties, Wally's Golden Horseshoe Revue was recreated on a soundstage at the Walt Disney Studio, and we got to be in the "audience." Wally needed our laughs to perform effectively.

Wally kept us laughing whether it was on stage or in the parking lot. See 'ya, Wally. Walt's waiting for you.

"No one sleeps while I'm on!" Wally Boag.