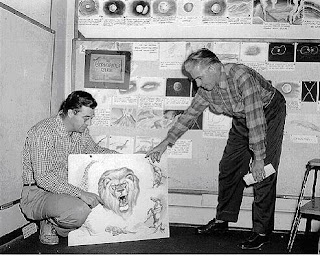 [Who is Charles Shows? Shows was a writer, but because he inflated his accomplishments (including claiming he created the Bob Clampett puppet show “Time for Beany” and originated “The Flintstones” for Hanna-Barbera) in press interviews over the decades and in his book, Walt: Backstage Adventures with Walt Disney (1980), it is hard to separate his very real and important accomplishments from imaginative puffery.

I have been researching Shows because he was hired by the Disney Studios in 1954 to work on the trilogy of space shows for Disney’s weekly television series. I will be doing a very special presentation on Saturday July 23 at the Disney Family Museum on Walt’s fascination on outer space, which will cover those shows as well as new material about them that I have uncovered recently. 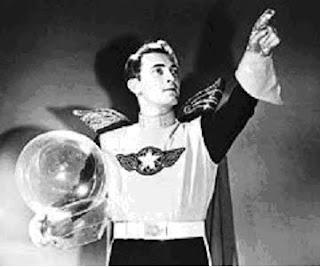 Shows was hired primarily because he had been working on a Los Angeles based local television outer space adventure show for KTLA. Over the years, many have assumed it was the show “Space Patrol” but it was actually “Commander Comet”, a five day a week show with puppets that lasted over two years and starred Larry Harmon as Commander Comet just about a year and a half before he auditioned for the part of Bozo the Clown. Shows later wrote episodes for the syndicated Bozo the Clown animated series.

Shows did not prove valuable working with Ward Kimball and seems to have been moved over to working on the True Life Adventure series and the People and Places series before leaving Disney in 1957 to work with Hanna-Barbera on the launch of “Ruff and Reddy” and “Huckleberry Hound”. Shows claims to have worked at Disney for a decade as a “writer-director-producer” and apparently did some scripting on the television show of Walt’s contributions to the 1964 World’s Fair.

The photo of Shows (from his now defunct website) in front of the storyboard (Shows appears on the right) may be for “African Lion” but the sign in back says “Explorer’s Club” and the board itself looks like the creation story from “Man in Space”. I have no idea who the guy of the left is.
Does anyone have any more information about Shows at Disney?
Posted by Didier Ghez at 9:49 PM

I remember Shows when he worked at Disney in the fifties. He was with Ward Kimball's unit for a time but then moved on.

Charles Shows wrote a book (I still have a copy) called, "Walt." I honestly don't remember what he did at Disney although he made it appear as though he and Walt were old pals. Somehow, I doubt that.