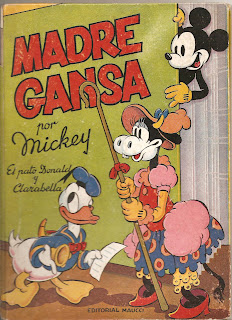 There were virtually no Disney items released in Spain after the start of the Civil War on July 17, 1936, so when one discovers a book like the one above (I was lucky to do so this weekend) one expects it to date from 1936. But I am also almost certain that this is the translation of the book Mickey Mouse and Mother Goose which was released in the UK by Collins in 1937, which means that it would have been released in Spain during the Civil War, which would be consistent with the quality of the paper used.
Posted by Didier Ghez at 1:01 AM

Hi. I think the Collins' MM & Mother Goose book appears to have been published in 1936, as one online seller offers a copy with "Xmas 1936" inscpription. It is the US edition by Whitman which came out in 1937.