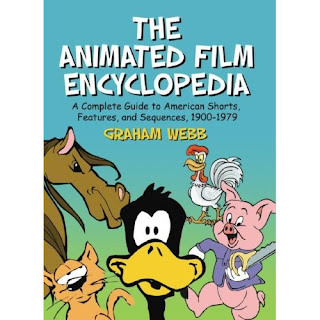 I was looking recently for any possible information about a Disney secretary who was part of one of the short cartoon units at the Studio in the '50s. I was not expecting to find anything. But I did: she was listed among the credits of a Disney short... in one place only, a page of the book Animated Film Encyclopedia: A Complete Guide to American Shorts, Features, And Sequences, 1900-1979 by Graham Webb. This caught my attention. Having reviewed that book in more details, I realized that it was the tool I had been looking for for years: a place where one can find detailed credits of all the Disney shorts (or at least all the shorts created for general release), including most or all of the animators who worked on each short, the layout artists, the story men, etc!

This is a treasure trove for researchers when it comes to reference books. I am still puzzled as to how Graham pulled it off: by checking all the animator drafts? By getting the information from some of the artists? In any case, to me the result is priceless. Graham is working on a second edition which will be released shortly. I will try and interview him soon for this blog.

A note of caution: there are several versions of the first edition of the book, including one in two volumes. I believe I am linking to the complete-one-volume set.
Posted by Didier Ghez at 10:34 PM

Amazon tells me, when I press the link: "We're sorry. The Web address you entered is not a functioning page on our site"

Thanks Hans. This is now fixed.