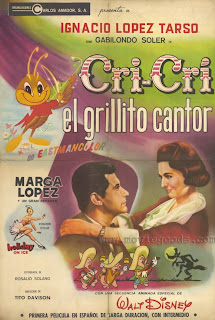 You may remember that the very first post of this blog a few years ago dealt with a 1963 Three Little Pigs sequence specially created by Disney for the Mexican movie Cri-Cri, El Grillito Cantor.

During my visit to the Disney Archives two weeks ago, I had the pleasure of finding a little more information about this project.
The sequence was originally supposed to feature the 3 Caballeros in addition to the 3 Little Pigs.

That sequence would get the production number 5954-039.
The animation draft dated July 9, 1963 contains the following information:

We also know that the story development was done by X. Atencio.
Posted by Didier Ghez at 12:10 AM

Thanks for sharing this link - but unfortunately it seems to be down? Does anybody here at disneybooks.blogspot.com have a mirror or another source?

I once had the original art to the complete sunday adventure of The Three caballeros and the Sea Monster from 1963. Produced for the spanish speaking market with King Features Copyright labels pasted on the art.
Dont know if it ever was published or who the artist was. Still got copies in my files, though.

Do you have more infomation on Dick Lucas.... He was hired by Walt himself and and Walt looked after him very sweetly , My Dad was there for 40 years stright from Chouinaed Art School... Walt once told him he was the tenth old man.. to him..Thank You
Julie Lucas Runco N.W.S, W.W.. yes I worked for Imagineering and the Park.. Live in Oregon now still painting and missing a great Father and artist...

Is there a way for me to contact you? I have very little info about your father but would LOVE to get more. Hear from you soon.