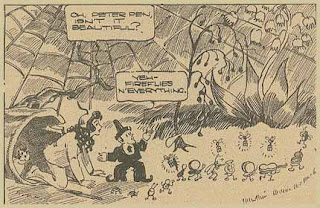 One of the key Disney artists about whom we still know very little is director Nick Nichols. I had the chance to stumble upon an interview with him at the Disney Archives a few weeks ago. I believe it is the only interview with Nichols in existence and I am looking forward to getting a copy of it (it will then need to be transcribed and released in Walt's People, of course).

In the meantime, here is an email I received today from Paul Trotter:

[I have run across information about Disney director Nick (Charles A) Nichols cartoon strips. Prior to his joining Disney he drew several strips including the Adventures of Peter Pen and Just Supposin about 1927-1937. He also sold a cartooning course. I've included some links below.

If you have not seen these before I thought you might find them interesting.

The Adventures of Peter Pen:

Cartoon Course: Here and here.]
Posted by Didier Ghez at 1:58 AM

"Nick" Nichols was my director at Disney, and some years later I worked with Nick at Hanna-Barbera where he directed for at least two decades.

C. August Nichols animated the coachman in Disney's "Pinocchio" and he told me he enjoyed animating, "The Mean Bastard."

Not just an animation person, Nick was also a director on the live-action television series, "The Mickey Mouse Club."