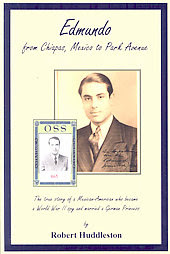 Here are a few books that you might find of interest.


The most astounishing by far is a biography of Edmundo Lassalle, a Mexican who came to the U.S. in 1935, became a U.S. citizen and an assistant to Nelson Rockefeller, then a member of the Roosevelt Administration before becoming an American espionage agent in Spain while employed as the European Representative of the Walt Disney Company.

The second is Amid Amidi's upcoming book about Pixar, whicj is finally announced officially on Amazon: The Art of Pixar: 25th Anniv.: The Complete Color Scripts and Select Art from 25 Years of Animation. (Thanks to Sebastien Durand for the link)

And finally another book that Sebastien found, but that does not sound interesting at all: Apple's Cores: Steve Jobs and the Power of Passion by Tory Maru.
Posted by Didier Ghez at 1:55 AM

What's the point to Amid's new Pixar book? Really.. do we need yet another "art of" from Pixar? ALl the movies are clearly documented in their own books. Do we need another one?? Hahaa