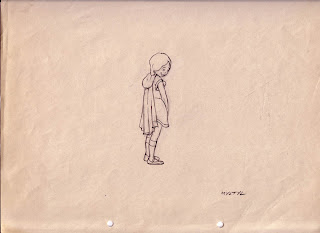 Two weeks ago I met Spanish collector Luciano Berriatua who showed me the above drawing (part of his impressive collection). Based on the type of paper, the size of the paper and the peg system, we can date the drawing as having been created at some point between 1928 and 1935 at the Disney Studio.


From the name of the character (Mytyl), Luciano deducted that it might have been part of an abandoned project by Disney to adapt Maurice Maeterlinck's play The Blue Bird to the screen.

Dave Smith confirmed the following: "There was an early story number (1007) for the project, which was written off on 9/30/39."

Interestingly Luciano also noticed that in Frank and Ollie's The Illusion of Life one can see the drawing below, whose caption reads, "Ham Luske's suggestion for a younger Snow White, more easily animated." That caption does not make much sense considering the drawing. Snow White with wings? Why? It makes more sense if one thinks of the characters from The Blue Bird representing the stars.

How seriously did the Studio work on that project? Did other drawings survive? Is there any correspondence between Disney and Maeterlinck? All questions that hopefully will be answered some day.

Hello Didier, I thought you might be interested in an unusual and excellent 1955 magazine article about Walt Disney on the Vintage Disneyland Tickets blog: http://tinyurl.com/65ndtnt