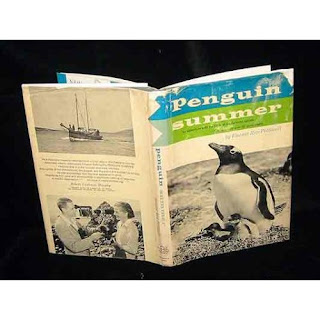 This seems to have been a True-Life Adventures week. I hope I am not boring to many of you, but, for some reason, since I interviewed Jack Couffer the subject has started to excite me. I will have a lot of cool animation-related material to post next week (including a few scoops) but here is one last post about the True-Lifes:

I still need to locate the following documents. Can any reader of this blog help me?

I had the pleasure to interview yesterday William Garst, one of the last surviving cinematographers of the True-Life Adventures. He worked on The Vanishing Pairie and on the True-Life Fantasy Perri. The interview will be released in Walt's People - Volume 12.

Sewall and Eleanor Pettingill also worked for Disney for a while and I have just located a book that tells about their adventure filming Penguins in the Falkland Islands (the islas Malvinas for my Argentine friends) for the company. The book is called Penguin Summer: An adventure with the birds of the Falkland Islands and was released in 1960 by C.N. Potter.

Finally, this just in from Jim Korkis:

[Here is an excerpt from the May 1959 issue of “THINK” magazine (Vol. 25 No. 5), an IBM employee publication. The writer visited and interviewed Walt Disney and here is Walt's comment on the True Life Adventures films:

“We’re doing True Life Adventures all the time. We have cameramen all over the world. Sometimes they disappoint us, though. We had one team in Australia, but they didn’t come up with anything. Australia isn’t a good spot for animals. No predators there. What can you do with a koala bear? He looks at you and eats a eucalyptus leaf." (Walt laughs)]
Posted by Didier Ghez at 9:17 AM

Hi Didier. I will scan and send to you this weekend the article which appeared in the Feb. 1954 American Cinematographer magazine. Cheers, David

Check your gmail account. I just sent you The Lurking Camera.

I found your blog only a couple of months back and love it so much, I've been stopping by as often as I can to enjoy your posts and the inspiration you offer! I'm a Disney-lover too! Hope you have a fantastic 2011!

Thanks for the kind words. They made my day.

You can capture the images from the Google Books version of the Popular Mechanics article using something like Download Helper in Firefox. Not quite a PDF, but maybe the info is helpful for you.