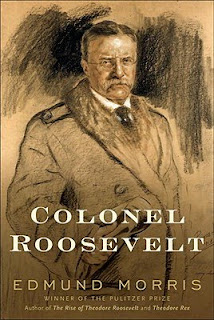 One of the most fascinating books I have read in recent years is the three-part biography of Theodore Roosevelt by Edmund Morris. It reads like a novel, while being meticulously researched (I am in the middle of the last volume, Colonel Roosevelt, which has just been released and that I had been expecting for years).

The reason I mention all this is that I discovered how interesting the life of Roosevelt could be thanks to a $crooge Mc Duck comic book by Don Rosa, but also because I just spotted on Amazon an upcoming book that seems to discuss the influences of both Theodore and Walt when it comes to preserving Nature in America: Film and the American Moral Vision of Nature: Theodore Roosevelt to Walt Disney. Not sure what that book will be worth but there is a strong chance that I will pick it up when the time comes.
Posted by Didier Ghez at 3:02 AM