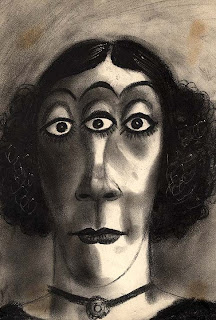 I just found the following image on the Ward Kimball page on Facebook. The person who posted it said:

[Another from the three-eyed women series. A couple have guessed it's for the Haunted Mansion. Not according to Ward. All we know is what he said in an interview once: "These are some portraits I did for Vincent Price. They called up the Studio for someone who'd do a painting of a woman. Nice, old-fashioned, with three eyes. So I sat down and made these sketches. They look like women you see."]

Any idea what this project might have been?
Posted by Didier Ghez at 10:09 PM

Maybe Price, an art lover with a sense of humor, wanted it for himself or as a gift for someone. Perhaps there was a private joke about a woman with three eyes; hence the very specific request. But that leaves the question of why Price, who certainly knew artists who'd happily indulge him, called Disney.

If it was an actual film or TV project for another studio, they'd likely have their own staff artists or favorite freelancers.

Maybe he was just being whimsical and thought it would be funny to have a horror movie star requesting such an image. Kimball never needed much excuse to indulge his graphic imagination.