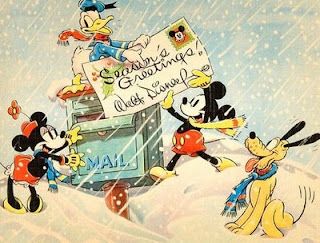 What would I love to receive as a Christmas gift this year? If Santa Claus were all-powerful, here are some of the Disney-history-related items that would make it to my wish list.

- The rumored (but unconfirmed) autobiography of Roy Williams

- All of Dave Smith's not-yet-transcribed interviews

- All of Michael Barrier's and JB Kaufman's not-yet-released interviews

- A full-run of the DeMolay Disney comics

- Production information about the Disney TV ads produced in the ‘50s

- The 1933 Technicolor test for Disney's / Pickford's Alice in Wonderland project

- All the lost Alice Comedies and Disney Oswald cartoons
Posted by Didier Ghez at 12:33 AM

Great wish list...even just two or three of the items would be fantastic!

I would add the release of Ward Kimball's diaries, either in their entirety or selected quotes, and the notes/manuscript Roy O. Disney had allegedly compiled for an autobiography.

Yes, how could I have forgotten the Kimball diaries (my holy grail)?!

I had no idea about the Roy O. Disney notes for an autobiography.

Hi son Roy E. mentioned them at one point in time...that his father had written quite a bit about his and Walt's history. I think it was mentioned too in Bob Thomas' Roy O. Disney biography. I think they went through the ocntents of many boxes in the garage hoping to come across the papers, but were never able to find anything. Too bad. Would have been nice to have had his perspective in his own words.

Shamus Culhane once told me that he was working on a book of short stories inspired by his experiences as an animator in the 1930s. I hope that whatever he finished survives, somewhere...

surprised you didn't include someone, anyone, getting a good oral history from Ron Miller ... would like to hear more stories from Dick Nunis as well ...

You are right, of course, those two interviews would be great to have if they existed. But I respect the decisions of Ron and Dick to remain silent.