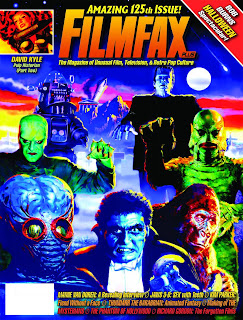 [Disney Historian Jim Korkis is an avid reader with many interests outside of Disney and as a result he sometimes stumbles on Disney information in magazines and books that other Disney fans might miss.

Jim writes: "I recently found two gems of Disney information in the latest issue of the cult film magazine, FILMFAX #125 relating to two former Disney employees who worked at the Disney Studio while Walt was alive. On one page, Ron Lizorty writes: "Chris Mueller came from a long line of sculptors. He and his dad sculpted a magnificent building in Balboa Park (when Chris was 17). Chris sculpted the temple in Korda's Thief of Bagdad and the snake in Korda's Jungle Book. Chris sculpted a lot for Disney--just about everything at Disneyland including the Jungle Cruise wild animals with Marcel (King Kong) Delgado, including the Peter Pan pirate ship. He even sculpted the ornate doors and air vents in the New Orleans Square sector."

Later in the same issue Ross Plesset has an article about Joe Alves who helped art direct H.R. Pufnstuf and directed Jaws 3-D. However he got his start at Disney as Plesset writes: "Alves found himself assisting Josh Meador animated the Id Monster for MGM's Forbidden Planet. During his time at Disney, Alves also had a personal encounter with Walt Disney, himself. While drawing an object for Sleeping Beauty (which Alves vaguely recalls as being a cookie), a hand came down over his desk and a voice said, "It should be drawn this way." The young artist looked up to see Walt Disney and replied, "Okay, Walt." He also saw firsthand Disney's well known tendency tobe very hands on, and his concerns about budget."

NOTE TO DIDIER: Mueller passed away but Alves is apparently still very much alive and still working as an artist/designer in the business. Maybe someone can track him down for an interview of his time at Disney and working with Meador. Forbidden Planet was 1956 and obviously Alves who was at MGM at the time went to Disney from there to work on Sleeping Beauty in 1959 and may have been one of the victims of the lay off after that film's release and then went into live action.

ANOTHER NOTE TO DIDIER: A new site came on the internet on December 1st and will be there through December and then disappear in January. www.mousevent.com is an Advent Calendar for Disney fans with each day a 5-7 minute story from a different Disney fan. On December 1st, Jim Hill talks about how character breakfasts started at Walt Disney World from a "Breakfast With Santa" in the Seventies. Jim Korkis tells a Disney Christmas story on December 15.]

Fascinating stuff. Back in the fifties I was in Josh Meador's office at Disney. I actually saw the "Id Monster" animation sketches on Josh's drawing table.

It was a very exciting time to be working at the studio. I was like a kid in a candy store.