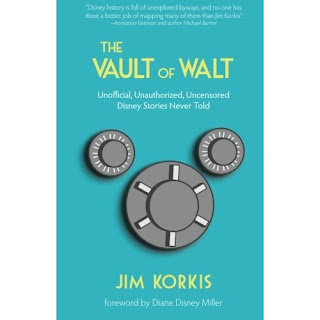 I was trying to find some information yesterday about the person in charge of the building of the Disney Burbank Studio in the late '30s, Frank Crowhurst. I googled his name and found something about him in an old article by Jim Korkis. I then started researching Disney and the space shows by Kimball, as background material related to an interview with artist Bill Bosche by Dave Smith which I unearthed recently, and realized that Jim Korkis had just wrote a great essay on the subject. My fascination with the DeMolay Disney comics started thanks to another article by Jim Korkis. And on it goes.

Which is why I was delighted to receive my review copy of The Vault of Walt last week. I am of the old school and still find it more practical to browse through a physical book than to search the web, so having so many of Jim's columns gathered in one place is sheer pleasure. There is more: since Jim has expanded on those columns tremendously I have also discovered tons of new information.

In other words, as I had hoped, The Vault of Walt is clearly a must have for any serious Disney enhusiast. The only thing missing (as is the case in the Walt's People series - but we are working on that) is an index at the end.

The exciting news is that I believe Jim is already at work on future volumes. I can tell you that I will be the first to pick them up.
Posted by Didier Ghez at 10:17 PM

As an interesting sidenote to what you have written, according to published reports I have discovered, Frank Scott Crowhurst supervised construction at the Hyperion Avenue studio dating back to 1927.

He was also the general contractor hired to oversee the work of Walt and Lillian's Woking Way residence, and he supervised construction at the Burbank site between June 1938 and June 1940.

Merry Christmas and Happy New Year, may all your wishes come true!

Thank you!!! You often have interesting posts! They put me in good spirits )

I enjoy reading this kind of stuff. Thanks for sharing good knowledge


I amazed with the research you made to create this actual publish incredible. Magnificent process!